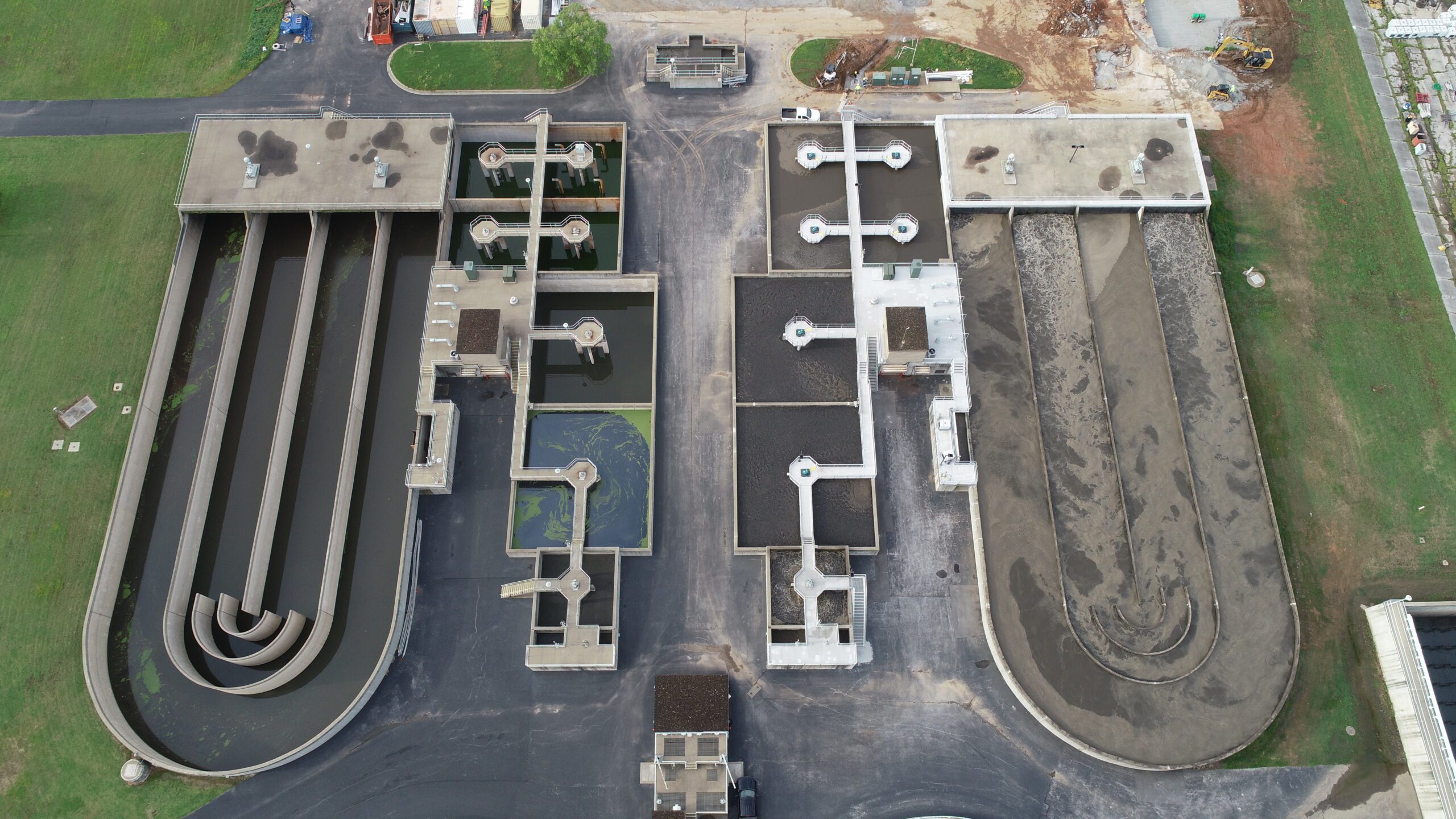 Our team had the rare opportunity to compare the effects of two different delivery methods on an identical treatment structure. We recently completed renovations at a single plant twice – once using the traditional hard bid method and then several years later using a collaborative method- providing us with valuable insights.

In October 2016, Rogers Water Utilities (RWU) in Rogers, Arkansas, hired Olsson to design a rehabilitation project for their first Bardenpho treatment train. The scope included dewatering and sediment removal of the aeration basin, concrete reinforcement and repair, equipment replacement, electrical work, waterproofing, epoxy coatings, and guardrail and handrail replacement. They procured this project using traditional Design-Bid-Build (Hard Bid) methods and awarded it to the lowest bidder, Crossland Heavy Contractors (CHC), in 2017. The total cost for this project, including engineering fees, was $2.04 Million.

This project posed a unique challenge due to the uncertainties of what we would find in the aeration basin once construction began. The design team had no way of knowing the necessary repair work that would be needed and did not account for such in the original budget. There were many overruns on the concrete repair due to these unforeseen conditions. The total contract was 660 days.

Two years later, the same client was eager to take advantage of Arkansas’s new procurement laws that enabled the use of innovative delivery methods like Design-Build and Construction Management at Risk for public water & sewer projects. This time around, they chose the Progressive Design-Build method.

After a two-step qualifications-based selection process, in January 2020, they selected Crossland Heavy and Olsson as their Progressive Design-Build team.

Here are our takeaways:

It’s important to note that the scopes of the projects were slightly different. The second project required additional equipment and electrical upgrades for the oxidation ditch aerator and re-air mixer for both treatment trains. The upgrades raised the project cost over the minimum $2M budget required by Arkansas statute to use alternative procurement methods.

See the table below for the two project and delivery method comparisons.

Due to significant scope increases, along with the impact of Covid-driven inflation factored in; it’s no surprise that cost went up between the span of the two projects – from $2.04M to $4.64M.

However, one standout benefit of this delivery method was the shortened timeline. Using the Progressive Design-Build method, our team could perform upfront work during preconstruction, cutting down on unforeseen challenges that could potentially stall the schedule.

Conclusion: The Construction phase lasted longer on Project 2 due to the increased equipment lead times and covid-delays. However, since construction began during the design phase, the overall timeline was shortened.

Not only does Progressive Design-Build allow for expedited timelines and risk reduction, but it also reduces administrative tasks for the Owner, including the following:

Through this method, we saved the client almost $30k. Although they had to take on the administrative burden of processing 17 change orders and getting them approved by the council throughout the project duration.

This open book and transparent process with costs and contingency gave the client peace of mind throughout the project. In the end, there was nearly $200k in contingency remaining which went back into the client’s hands to be used for “wish list items” or miscellaneous improvements that were not in the original scope.

We can work with our clients on which delivery method fits their specific needs best. However, there are major benefits shown to using a collaborative method like Progressive Design-Build, such as: