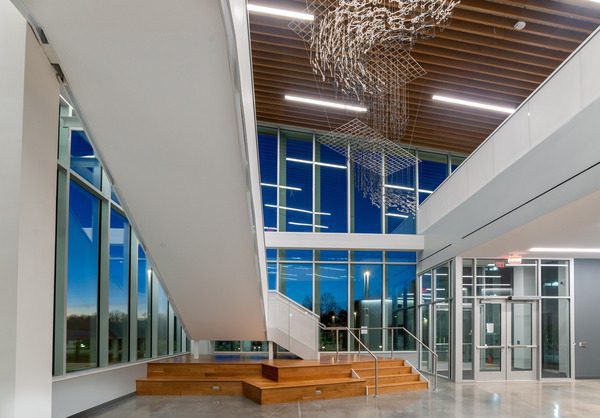 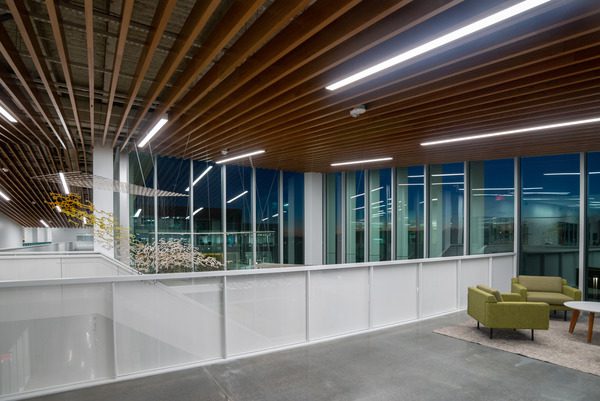 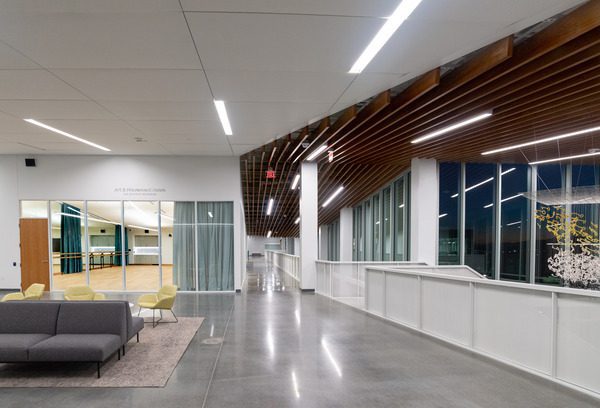 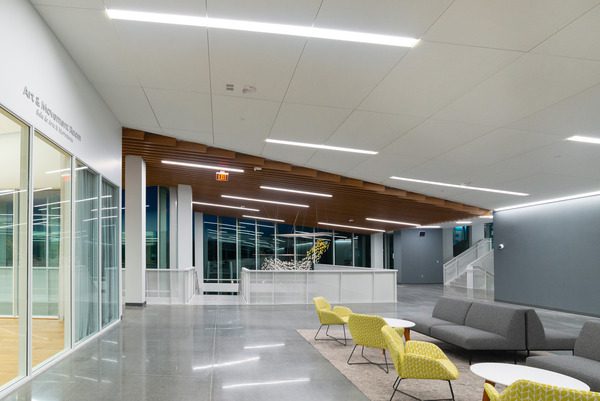 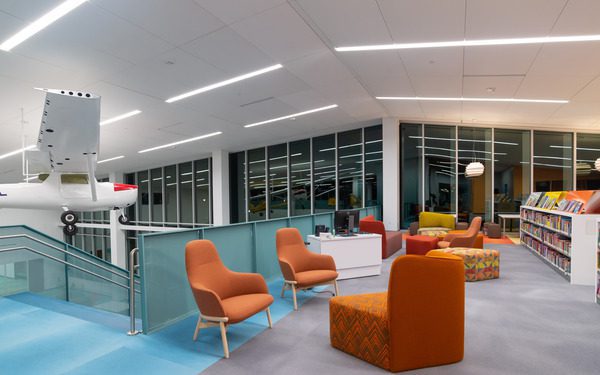 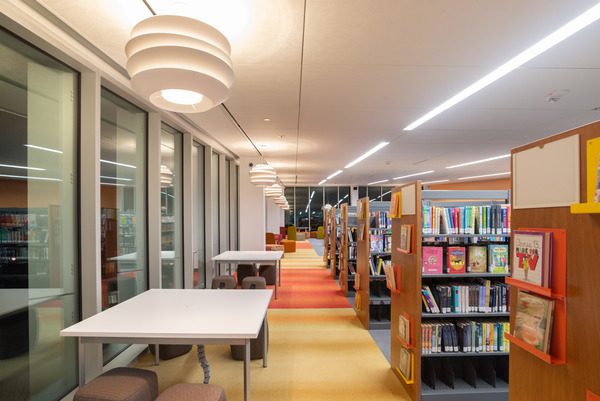 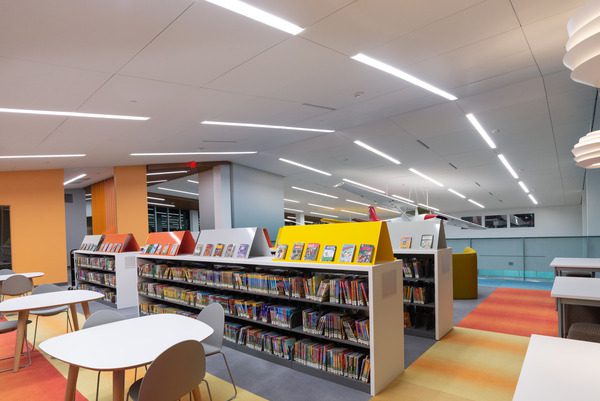 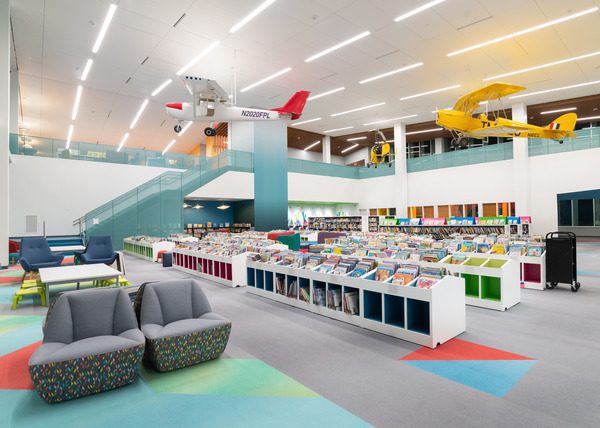 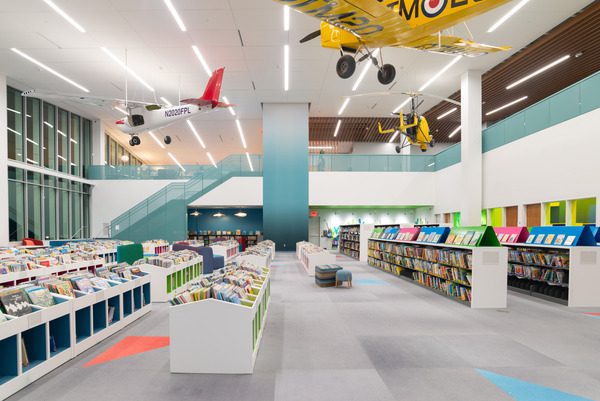 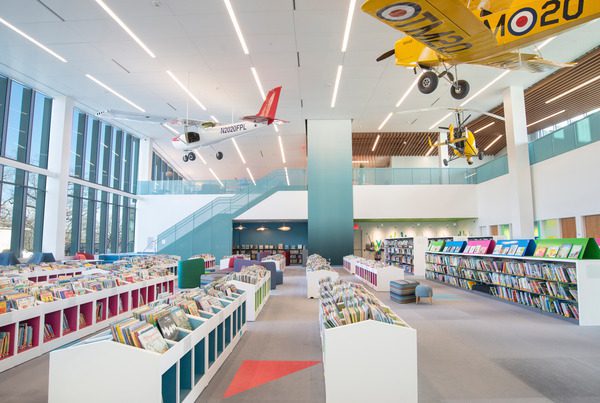 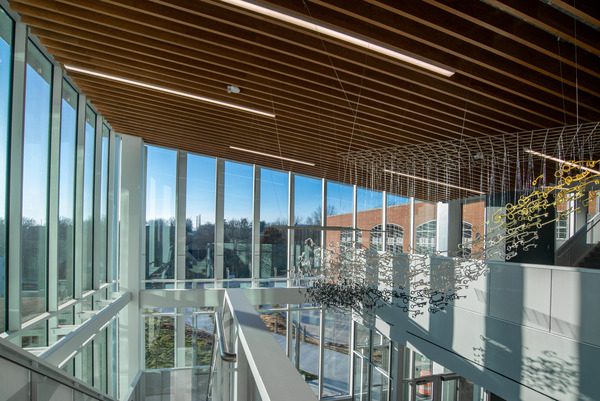 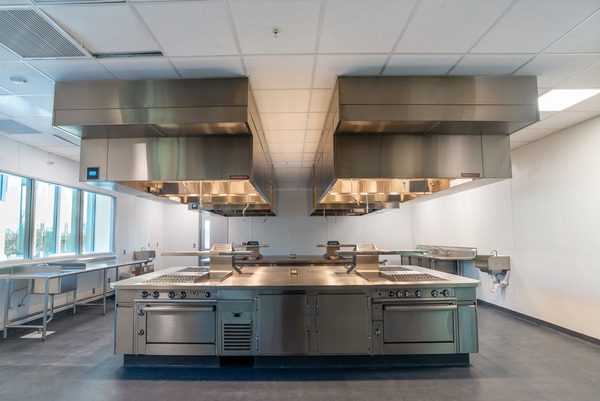 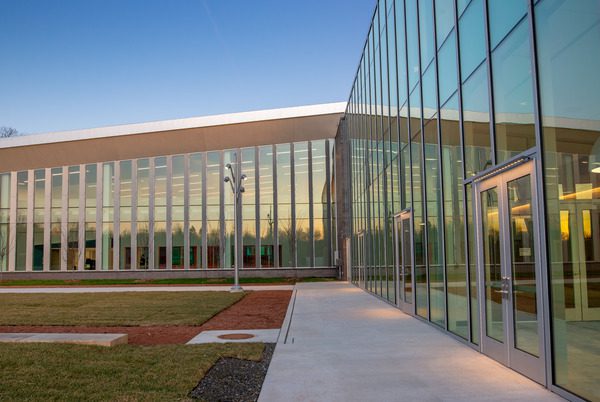 So much written literature has moved to a digital format. But that trend doesn’t have to mean a dinosaur fate for libraries, which are now expanding their purpose beyond just a place for books into spaces for community involvement. As a proud community builder in NW Arkansas, our Crossland team was honored to renovate and expand the public library for the City of Fayetteville.

It all began with the hopeful dream of Fayetteville Public Library executive director David Johnson, as he stood at a window eight years ago overlooking the abandoned City Hospital next door. The library was running out of room for their collections, and computer labs were always full from open to close. Acquiring the hospital property became Johnson’s vision to expand the city library.

A capital campaign called “Beyond Words” kicked off the exciting project, and current staff toured some of the world’s best libraries to gather ideas for modern features and amenities. The project goal was to double the library’s size by demolishing the old hospital and extending the library to the south. And extend it we did – quite impressively! Our team added 83,000 SF of new space and renovated the first three floors of the existing library. The result was 163,000 SF of new space — plenty of room for the features and amenities Johnson envisioned years before.

Built for the Community

Much of the new Fayetteville Public Library creates a feeling of community. We added a new 8,300 SF versatile performance hall that seats 700 people for a theater performance, 500 in banquet-style seating, or 1,000 attendees for a standing event.

Not wanting anyone to go hungry, the planners included a cafe where friends can chat over a cup of coffee or grab a snack. Warmer days might call for outdoor storytime in the grassy “gathering glade,” while 22 new meeting spaces and study rooms indoors mean additional public access and private workspaces.

There are also fun things to see for anyone just “hanging” around the library, as antique aircraft from the Arkansas Air Museum is suspended overhead, with room below for strollers to move about. Even health and wellbeing were considered — a new “movement room” was added for classes like yoga, tai chi, barre, and more.

One of the coolest new areas of the expansion is the Center for Innovation. Aspiring singers can try out and record their voice in a state-of-the-art recording studio. A flight simulator will appeal to aspiring pilots – or anyone brave enough to soar into the wild blue yonder. The innovation center also includes a robotics lab, photography studio, and a CAT simulator that offers training on backhoes, earthmovers, and forklifts for real-life workforce skills (and hopefully future Crossland team members). A stunning and spacious 16-station teaching kitchen was also added to the innovation area for local students, residents, or cooking classes.

Don’t Forget the Books!
Oh, we didn’t! Our team built 32,000 SF of new space to make room for the 100,000 additions the library plans to add to their collection. The children’s area includes a craft room, separate sections for preschool and elementary school kids, and a storytime room with glass windows so parents can see inside. A separate area just for teens has seating for study groups and socializing, a gaming room, and hundreds of age-appropriate books. Large west- and south-facing windows provide views of the new Fay Jones wooded area, part of the city’s Cultural Arts Corridor.

Blending the Old with the New

From a builder’s perspective, the Fayetteville Public Library allowed Crossland to really flex with architecturally stunning and contemporary construction. As a Construction Management project, we joined the project alongside the designer, so we were able to add value throughout the entire preplanning process. Once the building was underway, crews self-performed the concrete work, steel, and rough and finish carpentry.

A key portion worth highlighting is the ground slope under the library, which gives the appearance of the new addition being underneath the original structure. The existing library’s main level is now the new third floor, while the new addition became an extension of the original library basement (first and second floors). To compensate for the 68-foot level difference between each end of the jobsite, we built temporary level access roads, as well as lifts and scaffolding.

In addition to the slope challenge, electrical switchgear and primary overhead lines had to be moved underground. We coordinated the timing of that effort with SWEPCO, resulting in the phasing of construction sequences to better manage the owner’s deadline while awaiting the utility relocation. Crews countered the hurdle by running temporary overhead primary lines from the southeast end to the site’s northeast end.

Inside, a curved monumental staircase cut through the floor of the existing building beautifully connects it to the new addition, along with a sky bridge. The stairs feature radius steel railings and precast terrazzo treads. Modern carpeting, wall coverings, and ceilings that support the open spaces and furniture design bring the look and feel of the interior full circle. Since the existing library has cherry wood furniture, pieces were added to the new building as accents to the modern decor.

Construction is about relationships. Our team worked with the library’s director of facilities throughout the project to coordinate everything from employee and patron parking to trash removals and utility shutdowns and switchovers. Our Crossland teams went above and beyond our scope, such as figuring out how to gain access and hoist two airplanes and a helicopter to the Children’s Area ceiling and relocating an old bank safe from the downtown square that weighed upwards of 10 tons. Those were not changes or extras; it was just another day of doing what Crossland does to ensure our clients’ success.

At project completion, we we’re able to open the building on a timeline that satisfied the City of Fayetteville and the library. And, we brought the overall project in under the original construction budget by two million dollars. The Fayetteville Public Library is a beautiful facility that will now be able to flex and grow as the community changes.